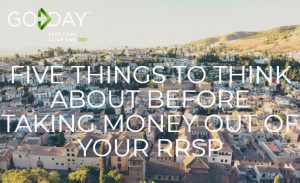 It can be very tempting when you’re in a financial pinch to want to dip into your retirement fund or RRSPs. The RRSP was created in 1957, and back then contribution limits were 10 percent of the previous year’s income to a $2,500 maximum. If an individual did not contribute in any given year, that year’s contribution room was gone forever. In 1968, the first year contribution data was available, only 172,000 people contributed.

Most people think of your RRSP as that savings account that you put money into to save for retirement. A common misconception is that the RRSP is a type of investment like a mutual fund, but it’s not. Simply put, it is a saving or investing account with certain tax-saving characteristics or in another way a personal pension plan for those who don’t have an official pension plan to fall back on. This is why there are a few factors to consider before taking money out of your RRSPs.

Taking Money Out Before You Retire

Taking money out of an RRSP account before you are set to retire can be very expensive. Why? Taxes. , This money is now added back to your income for that year and withholding tax what the government penalizes people for taking money out of their RRSPs. Yes, the money may be needed and you may think it’s a good reason to withdraw your funds from an RRSP, unless you’re retiring, buying a house or going to school, the government believes that you should leave your money where it is. According to a CBC report, almost four out of every ten Canadians polled in a recent Bank of Montreal survey admit they’ve withdrawn money from their RRSP early, and almost a fifth of them don’t ever expect to replenish what they’ve taken out. Some of the reasons people are withdrawing money early said they have to do so to pay living expenses. According to the same survey, 18 percent of people polled reported they did it to pay down debt. Both of these reasons the tax man will not accept as legitimate enough to waive the penalty for doing so as mentioned above.

Investopedia created a chart to help break down what it will cost you if you do take funds out:

There are two ways you can borrow money from your RRSPs tax-free. And we say borrow for a reason. The first is to buy your first home. You can borrow up to $25,000 from your RRSPs for a down payment on your first home under the government’s Home Buyers’ Plan (HBP). This counts for your partner too if you’re purchasing a home together. You won’t pay tax on the money you withdraw but there is one stipulation. You must pay the amount you took out back into your RRSPs. You don’t have to do this right away, as you have the next 15 years to do so. The second way to borrow tax-free is to pay for education or training full-time or part-time under the government’s Lifelong Learning Plan (LLP). The maximum you can take out in any year for this is $10,000 and you won’t pay any tax it as long as you pay it back over a period of 10 years.

Unlike taking money out of your RRSPs for education or housing, once take funds out of your RRSP, you lose the contribution room of that permanently. So what does this mean? If you take out $5,000, you can’t re-contribute it in the future, which results in the potential value of your total RRSP at retirement being reduced. Once you take money out, it’s like starting from scratch. You have to start over again to save it and you lose the growth on that money that you could have gotten if it had stayed in your RRSP.

As you can see from the chart above, taking funds out from your RRSP can be expensive. That’s why you need to consider all options before deciding to take money out of your RRSPs.  And here at GoDay, we like to be one of those options. As much as the payday loan industry has a negative connotation, we like to focus on the positives of helping Canadians get back on their feet financially. We don’t want to see our customers get further behind or fall further into debt; and want you to be set up financially for the future. So if using us now means helping you keep your RRSPs in check and financially better off for the future, we’re happy to help. For things like making sure your bills get paid on time or for any unexpected expenses that may come up, GoDay likes to be as transparent as possible so there are no surprise fees and you’re not paying more money than you have to.

Maybe a TFSA is a better fit for you if you’re finding you want to take money out of your RRSPs. The TFSA is also a savings account that can be invested but does not include tax deduction. So how do you decide between the two? It really depends on your financial goals and your timing. As mentioned, once the money goes into the RRSP, it should likely stay there until retirement. But with a TFSA, you can take out whatever funds you have available for any reason at all and you would pay no tax. This is a beneficial feature of the TFSA that allows for much more flexibility on what you want to do with your money but remember there is no tax.

We know what it’s like to be stuck financially. Make sure to consider all option if you are thinking about pulling out money from your RRSPs. Because there are numerous options available, you can speak with a financial advisor to see if there may be a better financial option out there for you.