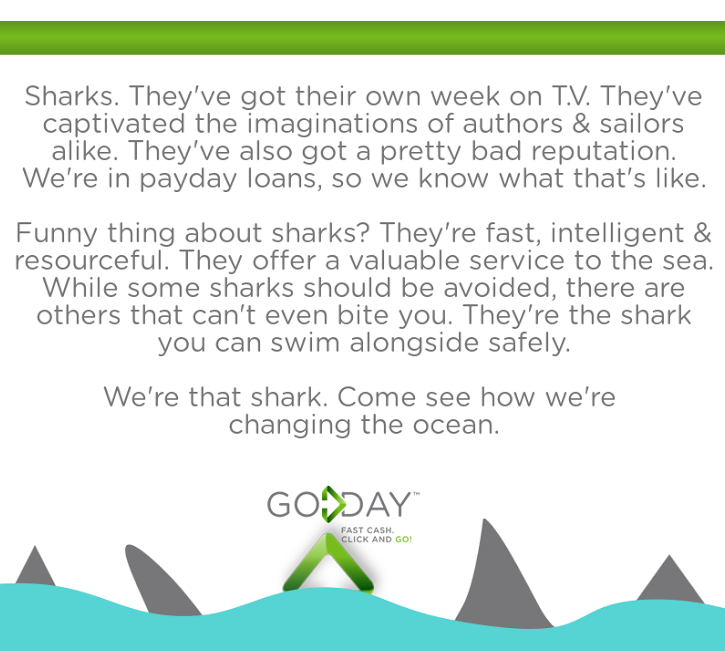 Let’s just cut to the chase – the biggest payday loan critics are those who have never truly needed the service before. While we absolutely support the need for strict regulation to protect the consumer from usury (we are members of the Canadian Payday Loan Association after all), we recognize that there is a huge misunderstanding about how the industry operates, especially here in Ontario.

We have stayed silent on the opinion that payday loans are a required industry, certainly because our position would seem incredibly biased. However, as our commitment to financial education in this sector grows stronger every day, it’s time to break the seal on our perspective.

Usage of the APR in any criticism of a payday loan is purely a scare tactic. How so? This might work in the U.S or the U.K where roll-over loans are permitted, but in Ontario, the logic behind
” 400%+ APR “ (or whatever hugely inflated numbers they have) does not apply due to the very nature of how payday loans work! You simply can’t stretch your loan out over an annual time frame. Your payday loan is, as the name declares, a loan based on your payroll schedule. There’s no grey area here, thus that three digit APR is absolutely irrelevant.

It will come as no shock that we believe payday loans are a necessary service. However, let us preface this by saying we understand it’s expensive in comparison to other forms of financing. This is simply the nature of the beast.

Any form of lending requires a consideration of the risk involved. The lender has to evaluate whether or not lending out money to a consumer is a reasonable, safe & yes, profitable. Many factors are taken into consideration to determine this risk, and it is often a combination of government regulation, credit information and in-house underwriting rules. No two banks are the same. No two payday lenders are the same. No two credit card companies are the same. You get the point.

However, unlike banks, payday loan lenders have considerably higher risk, even though the amount of money being lent out is much smaller than a traditional bank loan or line of credit.

Now that we’ve covered what didn’t surprise you, let’s go over something that probably will. Payday loan companies suffer significantly more bad debt (or loans that are not repaid) than traditional banks. Some critics may call this an inevitability because of the demographic that it serves. While there is a grain of truth in this opinion, the very probability of having a higher percentage of bad debt on a payday lenders books is intrinsically related to risk!

Payday lenders suffer, on average, bad debt percentages of almost 10%. This number lowers only slightly after re-payment efforts have been made. Traditional banks, however, see a much, much lower percentage of bad debt on their books – under 1% in most cases (see: The Cost of Providing Payday Loans In Ontario).

The Cost Of The Service

There’s an enormous myth that suggests payday loan lenders are extremely profitable. Of course they are, you might be thinking, the APR is so much higher than a traditional loan. The consensus among critics is that the high fees prey on those who can’t afford the service.

While the rate in Ontario is $21 per $100 borrowed, critics fail to take into consideration the operating cost of the business & the bad debt into the equation. On average, it costs almost 3/4 of the cash advance fee to pay for building rent, salaries, technology fees, etc. That leaves very little net profit, and the net profit can sway significantly from quarter to quarter, dependent on bad debt.

It Serves A Market

This industry serves a market that has grown considerably over the last several years due to demand. More and more Canadians are finding themselves “un-banked” and it’s not our job to judge or criticize how they got into the position in the first place & it’s not inherently a terrible thing. We have it on good authority (thank you to our customers!) that our loans have prevented both big and little disasters, and have also helped them save money in other circumstances. If it wasn’t for our services, what might have happened instead? We dare not think of it.

Correlation Does Not Equal Causation

The fact that lower-income consumers make up a percentage of payday loan borrowers does not mean that it’s the payday loans they took out that got them there or that keep them there.

That’s all we ask.